Compressors and limiters are used to reduce dynamic range — the span between the softest and loudest sounds. Using compression can make your tracks sound more polished by controlling maximum levels and maintaining higher average loudness. Here are some compression basics, different compression types, and some tips to try on your tracks.

Compression can be used to subtly massage a track to make it more natural sounding and intelligible without adding distortion, resulting in a song that’s more “comfortable” to listen to. Additionally, many compressors — both hardware and software — will have a signature sound that can be used to inject wonderful coloration and tone into otherwise lifeless tracks.

Alternately, over-compressing your music can really squeeze the life out of it. Having a good grasp of the basics will go a long way toward understanding how compression works, and confidently using it to your advantage.

Depending which compressor you’re using, and whether it’s a hardware unit or a plug-in, there are some common parameters and controls that you will be using to dictate the behavior of the compression effect. Below are some of the basic elements of compression. Your compressor may or may not include all of them, but understanding what each one does will allow you to work comfortably with a wide range of compressors.

The “knee” refers to how the compressor transitions between the non-compressed and compressed states of an audio signal running through it. Typically, compressors will offer one, or in some instances a switchable choice between both, a “soft knee” and a “hard knee” setting. Some compressors will even allow you to control the selection of any position between the two types of knees. As you can see in the diagram, a “soft knee” allows for a smoother and more gradual compression than a “hard knee.” 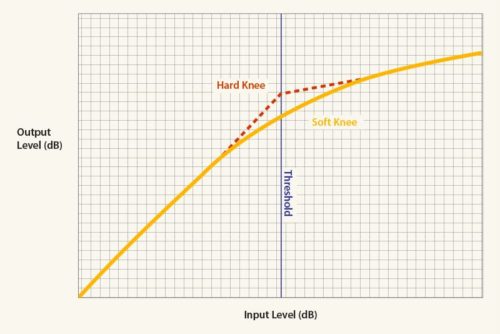 A “soft knee” allows for a smoother and more gradual compression than a “hard knee.”

This refers to the time it takes for the signal to become fully compressed after exceeding the threshold level. Faster attack times are usually between 20 and 800 us (microseconds) depending on the type and brand of unit, while slower times generally range from 10 to 100 ms (milliseconds). Some compressors express this as slopes in dB per second rather than in time. Fast attack times may create distortion by modifying inherently slow-moving low frequency waveforms (Ex. If a cycle at 100 Hz lasts 10 ms, then a 1 ms attack time will have time to alter the waveform, which will generate distortion.)

This is literally the opposite of attack time. More specifically, it is the time it takes for the signal to go from the compressed — or attenuated — state back to the original non-compressed signal. Release times will be considerably longer than attack times, generally ranging anywhere from 40-60 ms to 2-5 seconds, depending on which unit you’re working with. These can also sometimes be referenced as slopes in dB per second instead of times.

Normal compressor operation will be to set the release time to be as short as possible without producing a “pumping” effect, which is caused by cyclic activation and deactivation of compression. For example, if the release time is set too short and the compressor is cycling between active and non-active, your dominant signal — usually the bass guitar and bass drum — will also modulate your noise floor, resulting in a distinct “breathing” effect. 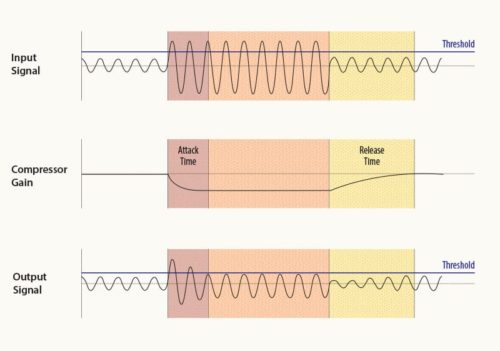 Set your Attack and Release controls to tailor the compression for your source and track. 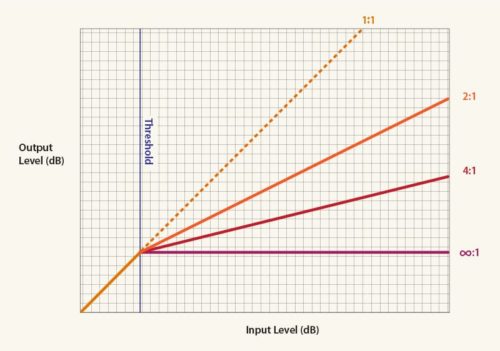 This graphic illustrates how your compression ratio will affect the overall signal.

Although compression is generally perceived to make a signal louder, in all actuality the compression-induced attenuation is lowering the output. This is where “output gain”, or “make-up gain”, comes into play. You can use the output gain to “make-up” for the attenuation done by the compressor. Some compressors will provide meters that can be put into “GR” or “gain reduction” mode to visually indicate the total attenuation in dB, allowing you to accurately apply the correct amount of output gain.

The type of compressor you choose will also play a large role in the overall sound of the effect. Some compressor types will have faster “attack” and “release” times than others, and some will have more “coloration” or “vintage” vibe based on the internal components. This is a list of the four most famous compression types and a brief description of how they differ. 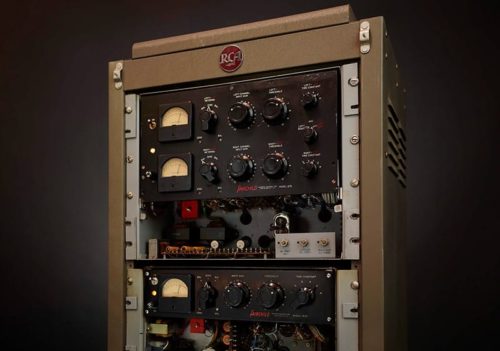 The Fairchild compressor featured over 20 tubes and was a favorite of the Beatles and Motown.

Perfect for nearly any source, the Teletronix LA-2A offers smooth limiting and also uses a tube for its make-up gain.

3. FET
FET or “Field Effect Transistor” compressors emulate the tube sound with transistor circuits. They are fast, clean, and reliable. The 1176 is perfect for vocals, bass, guitar and more. It’s also a popular choice for bringing out excitement in room mics.

The very first FET compressor, the 1176 has been used by everyone from Led Zeppelin to Michael Jackson.

4. VCA
Fast and punchy VCA compressors run the gamut — from the Rolls-Royce compression of the SSL G Bus or E series used on the mix bus and instrument groups, to the hot-rod attitude of the legendary dbx 160, which can give a snare drum or electric guitar unrelenting character. 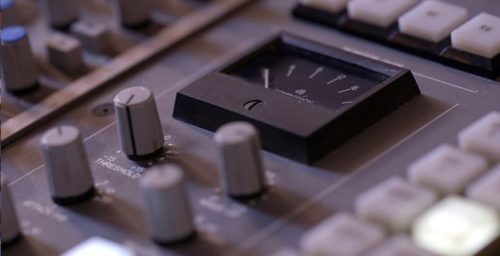 Here are a few suggestions to get you up and running with compression. These are certainly not rules, but hopefully these tips will help you feel more confident when using this extremely powerful, but easily misused recording tool. Have fun and experiment.

As always, let your ears be the final judge. If it sounds good, it is good.